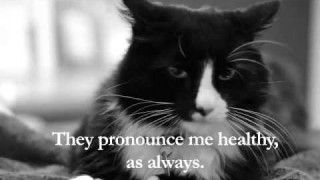 Henry is a Vet

Simon ‘s Cat : Beyond the Fence

This TV advert was created to coincide with the launch of Simon's Cat: Beyond the Fence.

What happens when a cat and dog wants to eat at the same time ? Now you know ;)

Someone is about to bleed ...

The Most Evil Cat In The World

The Most Evil Cat In The World

Lolcat art Gallery hosts exhibition of video cat phenomenon video. An exhibition has opened in London devoted to the online phenomenon of cats doing funny things, known as "lolcats". It is the first of its kind i...

A cat wins the Medal of Honor for his heroic actions in the line of duty. No cat was hurt in the making of this video.