A kitty eating a melon 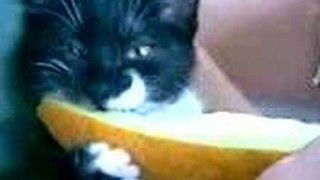 Keyboard Cat is the coolest cat in the World.

A hungry dog will need to resort to a new food and exercise regime after one mouthful too many.

Don't be fooled by their cuteness because these are really some crazy Jedi Kittens.

Orvillecopter has his internals renewed ! After this test he is ready for his maiden voyage at St. Art Gallery during KunstRai ArtFair Amsterdam. It's a tribute to the cat Orville, that was named after the famous...

My cat loves this, even though now he's over 20 lbs. He still rolls around on the floor wanting to be spun around.