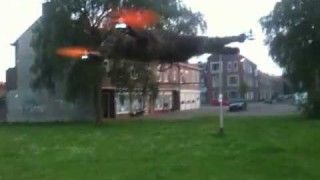 Orvillecopter has his internals renewed !
After this test he is ready for his maiden voyage at St. Art Gallery during KunstRai ArtFair Amsterdam.

It’s a tribute to the cat Orville, that was named after the famous aviator Orville Wright. After the cat was killed by a car, and followed by a period of mourning, visual artist Bart Jansen transformed him into the Orvillecopter: Now he is finally flying with the birds. The greatest goal a cat could ever reach!

A curious cat cat gets into a prickly situation.

These cats come from hell !

A Dear bathing a Kitty

A young deer bathing a kitty.